The Early Childhood Center in Autun is something of an architectural exception in terms of the production of the agency Tectoniques. A single-storey right-angle building, topped off with a broad, iridescent, reflective cap, it is a surprising presence in the surrounding environment and frames, in a playful and joyful manner, an urban landscape which itself is poorly established. The angular, dark exterior contrasts with a soft, rounded, colorful interior with some facades opening out onto the exterior and others kept opaque for the purposes of privacy. This generous facility covers 1,400m2 and contains a day nursery with 90 places (divided into three sections) and a center providing services for child minders. Spacious and comfortable for its users, the building creates a feeling of well-being both inside and out. About turn
In Autun, the building is located at the boundary between the historical centre and the city suburbs, characterized by 1970s high rises, surrounded by ill-defined public spaces and large, mostly vacant, parking lots. The extremely narrow plot of land has a complex shape. There is nothing to work off in the surrounding area, no features which lend themselves to dialogue or complicity.

The project has therefore taken a gamble on what is, for the moment, a solitary initiative. It creates its own setting, in the hope that a dynamic will be developed through the future changes made to the area, notably regarding the requalification of the surrounding public spaces. A bespoke project, it «weaves» around the existing spaces and develops two large, perpendicular bars open onto the local neighborhoods to the south and the east.

Silent from afar / playful up close The two main buildings are built on a plot of land which lies slightly lower than the surrounding area. The overall impression created is one of silence, deliberately tempering the building’s presence in the urban landscape. Viewed from afar the project looks like a fold in the landscape forming an abstract shape. Its real dimensions are only clearly visible up close. From this perspective, the scale seems immediately much larger, the texture much lighter and the architecture much brighter. 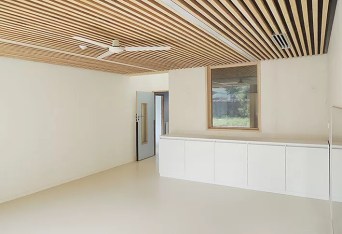 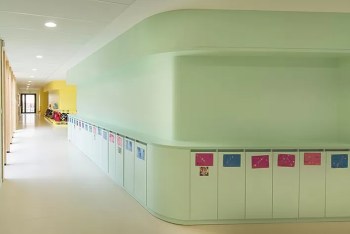 Iridescent and gleaming
The large overhang which protects the spaces immediately surrounding the building is composed of sandwich panels of bright polished aluminum. It sets the tone for the whole project and for the entrance area in particular where it intensifies the effect of perspective. The angle has been determined to regulate the amount of direct sunlight. As well as this protective function it also constitutes a scenographic tool, reflecting an ever-changing series of images and colors, sometimes clear, sometimes abstract, tinted pink or green depending on the light and the angle.

This dynamic and playful presence accompanies the children throughout their day, giving off a strong impression of vitality. It is accentuated by the neutral facades covered in dark, absorbing panels, fitted with charcoal grey blinds and woodwork. There is a very stark contrast between the interior and the exterior, emphasized by the choice of colors, materials and shapes (dark outside / bright inside; iridescent, gleaming finishes outside / mat, natural finishes inside; angular outside / rounded inside). An active central nerve and cellular niches The internal organization is simple, a series of generously-proportioned spaces follow on from each other with total transparency making them easily identifiable. The careful consideration given to the ergonomics, and the harmonious shades of color used, are perfectly adapted to a facility for children and infants. From the large entrance hall situated at the intersection between the two programs, there are views through both buildings. The program is connected throughout by a long, continuous hallway, a space of connections, transition, of life which forms the spinal column of the project. Programme:
a day nursery with 90 places
a center providing services for child minders